I got my first concussion Tuesday night.

Not even a cool story. I wasn't drinking tequila. I wasn't break dancing. I wasn't snowboarding.

Yeah. So, after rinsing out a little boy's poop potty in the bathtub, I reached over to set it back in its Paw Patrol holder. I must have taken a step forward to do so because, on my spring back to change the faucet to shower mode, I CRACKED my forehead on the wall that divides the tub and toilet.

I saw a bright flash of light, heard my teeth gnash and bounced backwards.

Well, that was a shocker!

I grabbed my head and wailed a bit as I hung over the side of the bathtub. Brady P looked at me timidly. I don't think he saw exactly what happened as he was preoccupied with his animals (go figure).

I was immediately filled with gratitude. As I heard (and felt) my head smack a fortified tile wall, I thought for sure I should be a heap on the bathroom floor, leaving Brady P to wonder why he couldn't wake Mama up by shouting "Boo!"

He would have been on his own. And nobody would have known. (Side note: I am now prompted to teach him how and when to call 911 once I can do something productive again.)

Then my mom called.

I told her what happened. She is a nurse, and she is keen to these things, so she said, "Amanda, you might have a concussion."

I thought about that for a moment. I just re-certified my First Aid/CPR training, and I had the signs and symptoms for a concussion mostly memorized. But now I was embodying them.

"I guess that's why people don't diagnose their own concussion," I joked. "Yeah, coach. I'm fine! Put me back out there! Haha!"

But Mama Wais wasn't really laughing. She was becoming a bit concerned. We decided it was pretty mild, so she gave me a list of things to do and don't and wanted me to check back with her later.

Brady P kissed my bump as gently as he could.

We made it though the night, and I managed to get him up and ready for school on time the next day.

The day was really rough. I felt like I got shot with a tranquilizer dart. I moved like a sloth. I talked in slow motion.

But I was alive!

Miss Liz dropped B off after school (That angel woman. I was not driving anywhere!).

After she left, I went over to snuggle by him on his little trampoline. He looked flattered.

"Mummy, let's take a rest together," he said, holding my neck.

In a moment, he got up. I stayed resting because that is what I did best that day.

"Here, Mummy! Here!" he was prodding.

I looked up, and he handed me my water glass. "Have a drink!" I was so flattered that I drank it all. "Oh! Good job!"

He took my cup away and brought my tea. "And here is your coffee," he said.

"Thank you, Brady!" I said. I took a little sip and set the cup down.

He was off to the next thing... and then back with his Guess Who card people.

I half-watched him as he took off the clip. I was still horizontal on the trampoline.

Then I felt a little card on my cheek.

"Did Eric just give me a kiss on my cheek?" I asked.

"Thanks, Eric." I said, closing my eyes again.

Then I felt another card on my cheek. He told me who it was, and I thanked them for the kiss.

Well, that little boy when through the whole deck and had each one of our card friends kiss me on the cheek. Then he did the same thing with his own sweet little lips. 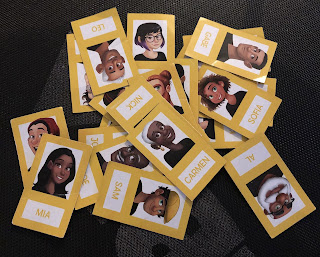 Seriously. What a little lover. This boy has so much love to share. I am extremely blessed to be a daily recipient of it. It will definitely help my head heal.