Hey! Happy holidays to you and yours. See you next year! 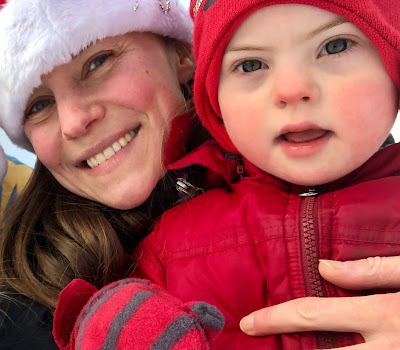 Happy winter from our little family!

As children grow and develop, their toys change.  The baby who was once thoroughly entertained by a hanging mobile and a squeaky toy learned to love dolls and trucks.

Okay, well, Brady P. was really never into dolls or trucks.  He moved on to puzzles, anything that played music and animals.

But now he is at a different stage.  A rather fun one that takes more of my (and other people's) time in order for him to play.

The first game I remember playing with him was the Memory game.  You know, a bunch of cardboard squares that you flip over then have to find the match by remembering where the heck you saw it last.

Our memory game was made from animal drawings by Charlie Harper.  Braeden already loved animals and Charlie's art, so I figure, why not.

Braeden was about three when we first started.  I didn't have very high expectations for his level of performance.  I didn't really know how much he understood because he didn't really talk.  And a few months before, when we tried it for the very first time, it was pretty useless.

So back on the shelf it went.

But during this second try, I was stunned.  He understood the concept of taking turns.  We worked on that in other ways before hand, so I wasn't too surprised about it, but it was apparent.

His slight OCD of feng shuiness made him excellent at putting the cards that were not a match back to the exact same place he got them from, and even making sure they were straight.  I don't even do that.

The smoothness at which we played the game was pretty effortless.  I think that he wanted to play the game so much that he made that extra effort to follow the rules, pay attention and keep it neat.

So we play again and again.  It's one of his favorite games.  But can I tell you the biggest surprise of all?

He is awesome at it.

We started off putting all the matches into one pile, so nobody felt sad about losing.  But now, he keeps his pile and I keep mine.

I kid you not.  He usually wins or ties me.  He remembers where the monkey was from a couple turns ago when I had forgotten.  He hastily finds both ladybugs after I just guessed wrong.

The boy has a photographic memory.

I'm glad I like that game too because he makes me play it almost every day.

Then one day at speech therapy, Miss Dawn had the "Let's go Fishing" game, and he really enjoyed pulling the fish out of the "pond" with his finger.

Well, Nana Mary thought he should have that game at home, so she got it for him the next day.  I mean, that's what grandparents do.

Now this game has a pole that the player holds as the "hook" is supposed to make it into the mouths of the fish as the whole pond spins and the fish open and close their mouths.

Oh me of little faith.  I didn't think he'd be very good at it.

Now I can't say he was as good as Nana (who taught me to fish in real life when I was a little girl), but he was doing really well. 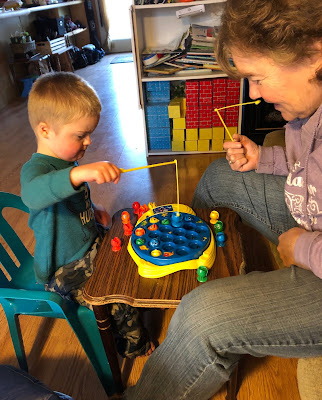 Concentrating on the next fish

With a little carefulness and patience, he learned how to pull the fish out without dropping them back into the pond.  Just awesome for his find motor skills.

Also, on a daily basis, he wants to play this game too.

So I have observed that he loves games.  He is really good at following rules.  He loves to be challenged.  He loves to play with another person.

And, over all, these games are really good for his fine motor skills, his patience, his concentration, his attention span, his learning and his amazing photographic memory.

I am really excited to visit the toy aisle this year, because that good little boy is going to get some new games under the Christmas tree.
at December 19, 2018 No comments:

We don't have a lot of snow right now.

But we have had some nice, smooth frozen puddles -- perfect for sliding on.

I've been trying to teach Braeden the different textures of the ground the past couple winters.

I know I've mentioned that before, but he has a new affinity for the ice.

He knows that it makes him fall down, and it's hard to get back up.  So he flounders.  He pretends to not be able to get up at all, actually.

It's hilarious for us both.

He just giggles and cracks up as he spins around and around on the ice.  Flipping over and squealing.

I haven't been lucky enough to capture this ice capade on video, but I did record the time that started it all.

That time he came inside the house after walking through the snow in his cowboy boots.  He had some snow caked on the soles, so he instantly slipped on the wooden floor.

And he couldn't get up.

My biggest regret about this video is that I was laughing too loud and I overpowered his laugh -- one of the cutest sounds on the planet.

But I will say no more about the scene, so you can watch for yourself.

The Most Wonderful Time

All is well in the Harbor.

In fact, it's a pretty unique time of year.  It's that time between hunting and snowmobile season where nobody else is here.  For the last couple days, I knew 98% of the people that drove by as we toddled or sledded along Highway 41.

We just wave to everyone, just in case.

It's quite whimsical.  I thought that places like this only existed in movies. Places so small everybody knows everybody -- and nobody else is around!

Pretty unique indeed.  I love it.

It's also that time when Captain Don and his crew (or, often just Captain Don) spend hours untangling lights, making decorations and standing trees around the park.  It looks great so far, but if you want to see it in its final glory, come up to Winter Wonderfest 2018!

It's happening in Copper Harbor on Saturday, December 15th from 10-6pm.  The craft show, bake sale, crafts... and maybe even Santa are at the Mariner  North.

Then, at 6pm sharp (unless Don has a lot to say about the park), we light it up!  Don't tell anyone, but there will probably be fireworks too.  Organized and safe, of course.

We're even getting festive at our house!  My honey pie and I harvested a tree, made some decorations and lit it up.  Our stockings are hung over the back window with care, or, um, thumb tacks.  And we try to exchange gifts once a week.

Brady P. is into it.  He's a little too much into the lights on the tree, but he will learn.  Some year.

And the fluffy snowflakes make it seem all festive out there.  The big lake is still open wide.

I feel fortunate to live in such a magical place.