You probably recall that Aaron and I have separated.  In fact, right around now is our official moment of divorce!  It's okay.  We are both better because of it.

That's pretty personal, I know.  But my point in telling you that is that the decision Aaron and I made between us has had a big impact on our families as the ripples cascaded down.

It is not necessary for me to go into the details of those ripples because, like any divorce involving children, the children are the priority.  No matter what.

In this case, Brady P. is that child.

Brady P's life started off hectic enough with all the traveling that was necessary for his health and family visits.  I carted that little boy all over Michigan, Wisconsin and Minnesota.  Sometimes with grandparents.  Sometimes with Aaron.  Mostly by myself.

So Braeden is used to the travel and seeing people here and there.  But what he wasn't used to was seeing both sides of the family without his mama.

In the last few months, I have dropped him off with the Rogers' side and gone back home or did my own thing for "Aaron's time" with Brady P.  So, in a situation where I would usually stay for the duration with the in-laws, I started to leave.  That's just how it goes.  That's part of it.

But Grammy Rogers, Windy as I call her, is one of my bestest friends ever.  Can you imagine the emotions we each went through as I divorced her son?  It was a lot.  A lot a lot.

And now, here we are, each our new, evolved selves, and our friendship continues to grow.  Our laughter still carries over the lake as we sit side by side throwing rocks with Brady P.  Our hearts still purge our deepest feelings and insights to each other.  And our uninhibited mouths still tell each other what the other could stand to fix about herself.  Ha.  That's a real friend right there.

The other day, Windy noticed that Brady P. doesn't like that her and I live in different houses and only spend friendship time together.  She said, "He thinks we should be together."  Because we have all lived together on and off since he was born.

Maybe that's just the way it is supposed to be to him.

Interesting enough.  He certainly lets his thoughts known as he begs Grammy Windy to stay when she tries to leave our house.

While we were still married, Aaron's parents and my parents became good friends.  They liked to drink their homemade wine together, discuss Brady P. and give each other gardening tips.  I enjoyed that they all got along.

Okay.  So here comes my point of this post.  I appreciate you wading through a borderline diary entry to get this far.  You are a trooper.

Last week, my whole immediate family came to visit.  My mom and dad, my brother and his wife, my sister and her son and even my brother's wife's parents!  I was elated that they all traveled such a distance to meet in my neck of the woods.

Well, at the same time, Aaron's parents were here, so at one point, we were all together -- some of them meeting for the first time because they live so far away.  I thought it was cool.

And so did Braeden.

In fact, the morning my family planned to leave, Grammy and Grampy Rogers, Brady P., Grammy Wais and Auntie Alex were all on the front porch with me.  Music was playing (as usual) from inside, and Braeden wanted to dance.

He has this new dance where he likes to hold hands with two other people, join in a circle and walk around while he does this crazy galloping jumping move.  (It could almost be a river dance, he is so bouncy!)

That morning he took the hand of Grammy Rogers and Auntie Alex, my brother's wife.  They all joined hands and danced in a circle.

That's so cool, I thought.  They just met each other, yet they are part of my family, and Brady P. got them to join hands and dance in a circle.

After they were spent, he reached out and took Grampy Rogers' and Grammy Wais' hand, and they all danced in a circle.  There he was again, joining people who may have never seen each other again because of the decision Aaron and I made last fall.

But Brady P. will never let that happen.  He knows there is more on this earth to keep us bonded in ways we may not understand.  And he proved it in that little unity dance, where no one hesitated to take another person's hand because he was the glue that keeps us together.

We should be so lucky.

And as a bonus, here is a picture Auntie Alex took of our little man at the nose of Brockway Mountain.  I don't know why he didn't have shoes on, but he still makes that jacket look way cool. 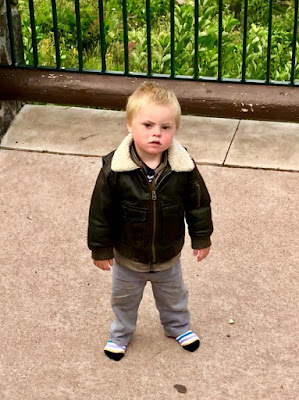 So this "hi" and "bye" thing is getting hilariously out of hand.

Yesterday we sat in my mini van, parked at the Houghton Culver's facing highway M-26.  As we shared and deeply enjoyed a double mushroom swiss burger, I noticed something new he was doing.

What is he doing? I wondered.  Why does he keep saying that so many times? I sat bewildered as the juicy mushroomy goodness dripped down my chin... again.

And then I listened to him as I looked out the windshield.

Oh, my God.  This kid is hilarious.

I turned to him and laughed.  "You're saying hi to all the cars, Braeden!"

He cupped his hands together and stretched out his arms in front of his body while he laughed his thanks-for-noticing-how-cool-and-proud-I-am laugh.

So each time he said "hi" several times in a row, I watched the traffic, then turned to him when it was done, and we laughed.  Just two goofy kids in a mini van laughing hysterically at... what would seem like nothing to most people.

The two main things that broke this line of events was another juicy bite of cheeseburger or a big truck.

Because when a big truck went by, he pointed and yelled "beeg uck" for big truck.  Yup.  Just like "big rock" except now we were looking at big trucks.  I caught onto that one fairly quickly.

But then the truck four parking spots over backed out and drove away.

"Bye!" he shouted to them with a wave.

Though I wasn't surprised, I just chuckled again.  That kid.  There is so much more going on in his mind than just talking to the cars that go by.  I wish I could tell you what it is, but I don't know yet.

Like I said before, I am so excited for him to be able to tell me someday.  Then Brady P.'s secret to life will be out.  And we will be able to help save the world.

Though this video was provoked, I wanted you to be able to hear his sweet little voice say "hi" and "bye" to you!

Did You See That?

I feel like Braeden is the epitome of inclusion.

He wants everyone to feel acknowledged.

And now that he can say "hi" and "bye" without prompting, at the perfect times, he is starting to spread his love verbally.

"Hi!" he shouts as someone new enters the general store while we are hanging out by the ice cream cooler.  "Bye!" he waves when they leave.

"Hi!" he calls when a couple walks down the road with their dog.  "Puppy!" he squeals and points.

"Bye!" he waves from his wagon when a pickup truck starts its engine in the parking lot and drives away.

"Hi!" he announces when a friend walks up to greet us.  "Bye!" he waves his excited, yet floppy wrist just before they turn to leave.  And their heart melts as his sweet, little voice acknowledges their departure.

My heart melts too.  And I often chuckle at his insistence on greetings... for the goofiest things sometimes.  But they are not goofy to him.  They are important.

I don't think he just sees the people.  He sees their energy.

With that being said, I've also noticed that he likes some people better than others.  He loves calm, loving people.  Peace, groundedness and caring.  I feel like he sees little rainbow hearts slowly dancing around their body.  He is drawn.  And he himself is calmed.

I am calmed by these people too.  And I am working on more peace within myself.  Don't get me wrong, I feel quite peaceful overall.  But when I am responsible for a small child who greatly enjoys running off into the distance without looking back, I have to stay on my toes.  And he can even feel that ounce of stress in me.

He probably sees it.

Like little loaded springs bouncing irregularly around my head as my tension and alertness rise.  I know he sees something.  And I am so excited to ask him about it when we are able to have conversations.

But for now, I just watch his emotions.  How they express on his face and throughout his entire body.  He can't hide how he's feeling -- not for a second.  His uninhibited nature expressed it fully.  And he is able to read it in others.

So go ahead, express yourself.  And imagine how Brady P. would react.  Are rainbow hearts dancing around you?  Loaded springs?  Lightning bolts?  Roaring tigers?  Babbling brooks?

Try being mindful of the energy you give off and the energy you feel from others.  Cuz, if you were Braeden, you would see that whole other realm.
at July 11, 2018 No comments:

I'm going to encourage you to enjoy the holiday by taking the day off myself and enjoying the holiday.  Ha!

Brady P. and I have ice cream to eat, bubbles to blow, rocks to throw and fireworks to watch! 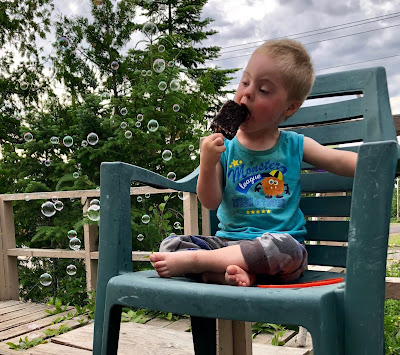 Two out of four ain't bad