In this town, people flock to visit during the time of year when they can do the things they love to do. And as the saying goes, "Birds of a feather flock together." So when people meet each other at a restaurant, bar or outdoor gathering, they usually mention what they are up here for (if it is not already apparent by their apparel).

People who rode up on motorcycles love to talk to other people who are up on their bikes. They will probably buy each other a drink and become friends and exchange numbers before the night is through.

Having Brady P in my life has also taught me that other people who have a special person with that extra 21st chromosome in their life flock together as well.

B and I have made a few friends based on this fact alone. We are able to chat for long periods of time, nodding and smiling, because we also have that common interest that has taken over our hearts.

We have had people recognize us from this blog, and it's always nice to meet you.

We have also had people who know nothing about us, but they will just stop and talk to Braeden to bask in his glory. "Kindred spirit," they will say with no other explanation. Or, "I had a sister," they will nod.

Just like motorcycles and sailboats, this common thread makes us feel bonded before we even speak. It's so refreshing to watch how people connect from a spark like this.

I'm grateful for the new relationships I've found, and I relish in how the simple act of Brady P's smile and "Hi, how's it going?" can make someone's day.

It's neat to watch this happen between strangers. It's fun to feel it happen to myself. And it's apparent to me that, in all realness, we actually have more in common than we know.

We are humans on this planet.

There is a lot to talk about with another human simply because that's what we all are.

My and Brady P's mission is to help people believe that.

Thanks for being part of our mission! 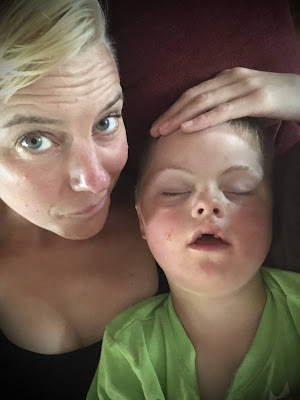 My toothless wonder fast asleep.
Sometimes a tuckering out and an old-fashioned rock-a-bye is what bonds us.
at July 28, 2021 1 comment:

I don't think I really need to explain how difficult it is to find the time (and desire) so sit at a computer during the summer. There are so many other things to do!

So bear with me if posting is spotty.

We sure could use some rain, but I think most states are in that boat. Especially those with the wildfires burning. My heart goes out to them!

B and I are just trying to make the most of the hot weather. Here is a pic of bubble time the other day. Brown grass and all. He is getting good at swinging that wand! 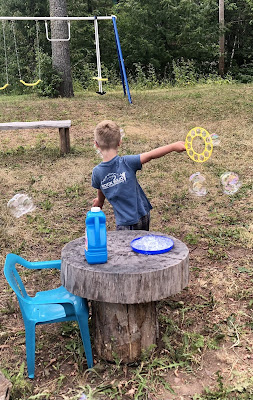 The berries are out! Bils and blues for sure. Raspberries and cherries as well. Thimbles are just starting.

And pretty much everybody who works in town is in a robotic state right now. "It's July," they shrug.

Town is seriously busy, and that's how it goes.

I really do enjoy my new perspective of being a mother instead of a bartender this time of year.

Life used to be working crazy many hours each week serving  locals and visitors at a whirlwind pace. Now our biggest social interaction involves walking through town while little man says "Hi, how's it going?" to everyone. The life of a speedy server is something he can't even grasp, and I am happy for him. He then shares his perspective with me.

Even with all the other jobs I have currently chosen to pursue, I am either working one-on-one or with small groups. It's quite a change from my early years in this town.

But it sure is uplifting to see my friends, who are running around in automatic mode (I know the feeling!), smile and take a moment to high five or hug little Brady P when we come around.

That is truly one of his best gifts: to remind us how important it is to take time for and acknowledge the ones we love.

Even when we don't think we have the time to do it.

Brady P. is coming into this stage of development that is kind of shocking to me.

Not only is he exerting independence, but he is really blossoming his creativity and preferences.

As a mother who started this journey on high alert for health and safety, this has taken some getting used to. I actually have to consciously shift my attitude and priorities in order to allow him to manifest his individuality.

For instance: I usually just cook for us, set everything up for us and tell him when it's time to eat. But he really likes to help me (or anyone!) with whatever needs to be done.

So one day, while I was making lunch, he came over and said, "Mummy, let's have a picnic!"

It was a lovely day, and I need to let his ideas flourish, so I said, "That's a great idea! Let's get it ready!"

I set out a "picnic tray" and had him load his fork, his drink and some napkins. He did it all with pride in his step. When everything was finished, I carried the tray, and he helped me with the door.

"Mummy, right here," he said, so I knew where to set the tray down.

We had a nice little picnic in the sunshine. It was his idea, and he helped make it a reality!

On Monday, I took him into the co-op to get some groceries. I pulled out a shopping cart (they are smaller than most carts), and B said, "I push it!"

Well, off he went like a bat out of hell, and I had to reign him in and pull him back to the correct aisle. Then he took off again, stopped at the sale rack and put a bag of veggie chips in the cart... like he was in charge.

He picked out a different flavor.

Nice. Okay. We can do this.

Then he zoomed off to the next sale rack, lifted a large bottle of avocado oil off the shelf and gingerly put it into the cart.

Then I figured I should just let him shop because he was picking out things that we actually use, and, well, they were on sale!

After we parked the cart in the produce section, he picked out carrots, cauliflower, broccoli, an apple and a watermelon.

Some things we already had, but the things that were not on my list, I let him keep because that probably meant he would eat them. Good deal.

At the check out, he helped lift some items to the counter. What a little man he is. He is only 6 and a half, and he really enjoys doing the mundane things in life because, well, that's what people do!

As his mother, I need to let him.

It's as though the routine things that used to be a struggle are more automatic to him because he is able to branch out beyond the mundane in a more creative way.

It's awesome for me to watch it unfold for him and a relief for me to know it will happen.  I can just let some things go.

Especially the things I stuck into a pattern in my own mind. Releasing them has allowed him to be himself.

Ahhh, welcome to parenthood all over again! 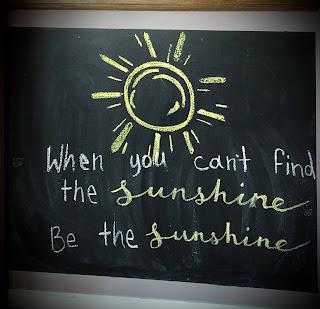 Here's the welcome sign at our chiropractor office. He was a star there too because we just let him do his thing. He almost got hired as the assisstant!
at July 07, 2021 1 comment: