Things are looking up!  Hooray!

Gratitude is a huge part of having a wonderful life. Then you can have a good life pretty much wherever you are. Because you are grateful for what you already have.

That's a blessing right there, my friend.

An attitude of positivity combined with fortitude is also quite helpful. Sit in the driver seat of your life. Make your own decisions and goals. You have the accelerator, the steering wheel and even the brake.

You can change your mind.

When you listen to your body, heart and soul, this happens a lot.

It's okay to change your mind.

Only you know the truth in yourself.

The universe is talking to you everyday!

Okay, there's my little motivational speech for you. Thanks for reading!

Now how about something about Brady P?

I love that he is growing into such an amazing young man. I love that he is becoming such a good helper. He is definitely his spirited individual self, but I supposed that's better than the alternative.

He just keeps me and all his support team on our toes.

And life is good.

If you are grateful, then life is great! 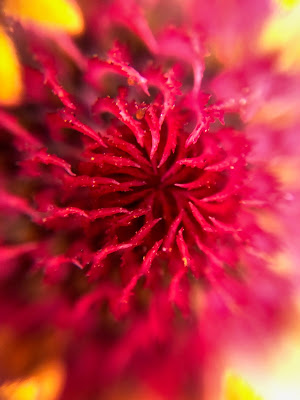 The inner magic of a zinnia flower
I've been meaning to tell you that the platform I use to write to you no longer sends an email when I post, so you might have to click here every couple weeks to look for something new.
Cheers to a wonderful day!
at August 24, 2022 2 comments:

Shop til You Drop

Monday we had to go to town for B's annual eye exam.

It can take an hour to get to town from here depending on summer traffic (not busy, but slow!), so I decided to check out a couple hours ahead of time and lollygag.

We took M-26, the lakeshore drive. And yes, all the cars ahead were quite slow, but we were not in a rush!

It was lovely as Lake Superior's water sparkled and reflected the blue sky. Ahhhhh.

We grabbed some lunch and dawdled around. I also had to grab two food items, so we went to the local grocery store. Brady said, "I'll push the cart!"

Good, I thought. That will keep the boy on a mission!

But with only two items on my list (I still made a list), I grabbed a "basket" instead of a cart. This basket, however, was on wheels with a pull handle, and it was almost as tall as he was!

I pulled the handle out and announced, "Here you go! You can pull this!"

Aaaaand off he went with a red basket rolling behind him.

He stopped instantly for a pack of Bubly in a new color of box. "Mummy, let's get this one!"

Then he proceeded to stop every few yards to try to put another unnecessary item in the cart.

But he did find a few other acceptable items: bananas, sweet potato, watermelon. He also tried shoving a box of ice cream cones in there several times, but I had to keep reminding him that he can't eat ice cream like that, so we didn't need them.

By the time we got to the end of the store where I found the things that were actually on my list, the basket was pretty full!

After I added eggs and yogurt to the mix, he decided to swing that rolling cornucopia up and down every aisle saying, "Just one more thing."

Luckily, we had time to spare, so I just let him use up that youthful energy. I kept laughing under my breath and shaking my head in wonder and amazement.

I love watching him take charge in another environment. It's so meaningful to observe what he does. And it's pretty fun to follow him around and see what decisions he makes (while nixing his poor ones at my discretion).

He was really good that day. He has become quite the astute and pleasant traveler. I mean, I actually like to go places with him now! Before it was such a chore. Any new parent knows that.

And he was even super awesome for the eye doctor "to check my eyeballs!" he would say. Ha! What a guy.

A little shift up in his prescription should benefit him.

Now I just have to figure out where else we can go to help empower him! 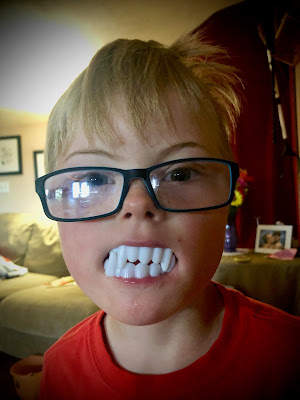