Our neighbors are really cool, and they ordered an American Ninja Warrior line for our backyard. We have the space, and they have the stuff, so it all work out.

Mr. Braeden has tried it a few times, and I have already seen significant improvement in his endurance, balance, strength and confidence.

Here is a little video. My favorite part is the giggles at the end.

I hope you're doing great.

We sure are! It's been such a wonderful summer. I think we're making the most of it, and that means a lot because snowblowing season is not far off... and that one seems longer. Ha!

Town sure is busy, but it's the last hurrah before most students go back to school -- if they haven't already!

Brady P and I still manage to find some solitude up here though. We know some of the secret spots, and we take full advantage.

He absolutely loves to hike the trails, especially when there's a beach or two or three on the offshoots.

"Mummy, look it! A beach! My favorite!" he'll shout like someone just gave him a pony. I absolutely love his zest and gratitude for anything remotely joyful. It sure helps me remember it too!

So we've been sure to find new places to throw rocks and hike. It keeps life exciting, you know? And it breaks him out of his routine bubble a bit. He is really a man of tradition, so it's nice to see him curious and seeking new things.

Like actually wading into Lake Superior! It's finally warm enough for more than a cool-off plunge. I'm so glad he enjoys that because it sure has been hot!

And there are always rocks to throw. 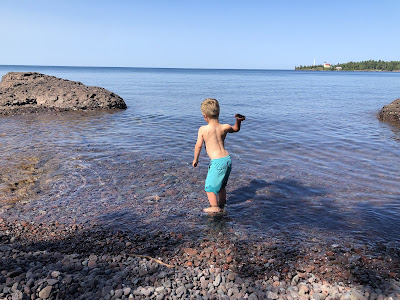 Yoga on the Planks

Last week was pretty stressful, but I am prevailing!

Brady P could tell I was stressed, and he became stressed too.

Then one afternoon, he took the initiative to resolve it. The power of his intuition and magic never cease to amaze me.

"Mummy, let's go for a walk!" he proclaimed tugging my arm towards the woods.

"Braeds, we promised to meet a friend right now," I argued. "Let's at least go home, so I can let her know."

After a few deep breaths and an internal struggle, I gave in. He was not budging, and the only way I would get him to turn around was if I threw him over my shoulder kicking and screaming.

That was not necessary.

And, little did I know, he had a plan.

He took me to see the horses (who have really taken a liking to him, I might add). Then we walked around the meadow.

He lead us to a pond and up another trail that goes up and up the ridge.

By that time I was starting to give in to the fact that I would be following a six-year-old on a mission for the next unknown amount of time.

We went up and up. I was kind of hoping he'd get tired and want to go back down, but no dice.

Finally, somewhere in the middle of one of the Keweenaw's longest boardwalks, he stopped and announced, "Mummy, let's do yoga!"

Then, right there, on a stretch of elevated planks, Brady P lead me in a yoga session.

"Okay, now stand up! Arms out! Sit down and hug your knees. No, like this," he said, wiggling his hands until I got it just right.

We contorted ourselves and breathed. I adjusted my hands to his liking, and we breathed.

After sitting up from a laying down position, I looked down the boardwalk. The planks descended and curved out of sight. The thimbleberry bushes contrasted the gray conglomerate walls with brightness and life.

And I was in the middle of a yoga session with the coolest person I know.

I shed a couple tears.

I felt a weight off my shoulders. I felt peace so deep in my bones that all the stress released. It could no longer penetrate me. I became peace.

All thanks so Brady P. He knew I needed that. And he delivered it.

My gratitude for that little boy and that moment overtook me. I have been much better since.

And so has he.

Thank you, my little yogi! 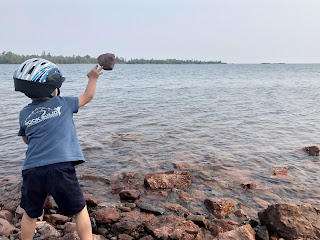