I was going to share a sad story with you about my sweet Mr. Buttery boy because yesterday was his birthday.  He would have been 13 years old.  But he died 5 years ago as a martyr. 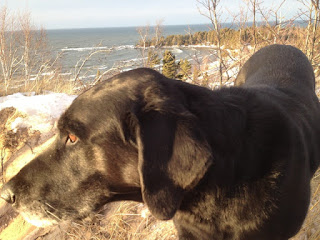 Duce the Butter Boy in has last weeks

Anyways, I will spare you the tear-jerking tale (this time!) of his asceticism and passing and tell you kind of a funny dog story instead to get my point across.

The point of this post is to talk about doing the right thing.  The right thing can change from moment to moment, and you will know you got it right when you feel it in your heart.

When I was young, I was often a jerk to my little brother and sister.  I bossed them around as any true big sister would.  I tried to get my way all the time because, of course, I was entitled as the oldest.

One summer day I was feeling extra hungry for lunch, so I asked my dad for two hot dogs with my macaroni and cheese instead of one.  Right.  Like I could eat two.

After I finished one hot dog and my cheesy bowl of noodle goodness, I looked at that second hot dog and thought, "Oof.  I can't eat that!"

But instead of being a good person and leaving it on my plate, offering it to someone else or tossing it back into the boiled hot dog water, I snuck it in my hand and dropped it into the garbage can.

It might have been if I was smart enough not to throw it where I did... in the living room trash can... right next to my dad's comfy chair... on top of all the tissues and wrappers.

A couple hours later, my dad asked, "Ahhh, who threw their hot dog in this garbage can?"

This did not fly with Daddy Wonderful.  While some dad's might have threatened with a belt, he took a different tactic.  He was a very loving dad who did his best to raise us with dignity -- not lying about a hot dog in his garbage can.

"I'll ask you again," he continued.  "Who threw their hot dog in the garbage?"

I think that, more than anything, he was shocked that his kids would lie to him.  Especially about something so trite.

"Okay, then.  You each have one more chance to tell the truth," he said as he broke the room temperature link into three bits.  "If nobody tells me the truth, you will all get to eat a piece."

He almost could have had me at that point.  I know where that hot dog landed.

But I already started my lie and I was too stubborn to go back.  Besides, it was only my little brother and sister who were going to get punished too.  My six-year-old self didn't think they were that important.

That does not mean they were happy about it.  Or that it was fair to them.

My father, following through on his word as he should have, reluctantly handed us each a piece.

"Here you go then," he said, still expecting one of us to cave.

As I held that cold, sweaty piece of meat in my fingers, I almost gagged.  I had one more chance to fess up and back out of such a disgusting feat.

But the same sheisty little part of me that got us me into that mess was going to keep me in it.

Oh, man. That was terrible. No ketchup or anything.  Plus the terrible feeling that I held fast to a lie to my sweet father and put my siblings through unnecessary roughness.

I was in high school when I admitted to my family that it was me.  I remember because I wrote a paper about it in English class.

My dad said he felt pretty guilty about that, but we all lived, and I deserved it.  It would be nice to say that I learned an important lesson about telling the truth, but that would not be the last lie I had to battle through in my youth.

Today, however, I feel that it's much easier to tell the truth right away.  Then the other people involved are not so confused.  And I don't have to remember what I already said.  Or backtrack.  Or rehearse the next thing I need to say over and over and over in my brain.

I just get to clear my conscience and move on with life.  You know what the best part is?  The other person usually isn't even mad once you fess up that you made a mistake because that is hard to do.

But doing the hard things gets you way farther when they are the right things.

If you ever find yourself in a moral jam, just ask yourself, "What is the right thing to do here?  What is going to be best for everybody in the long run?"

If you can be honest, forthcoming and considerate of all parties involved, then you are on the right track, no matter what.  Even if you feel like you don't get the best deal right away about doing what is right, you will be rewarded in the end.  Or the next day.  I don't know, I am just telling you what I notice about life.

Birds of a Feather

Brady P. kind of has a new pet.

It's really Craig's pet, but the pet gets to stay here a lot.  We like him.

His name is Kirby.  Kirbeeeeeeey Puckett, is what we call him, and he even says his name like that!  The Minnesota Twins would be proud. 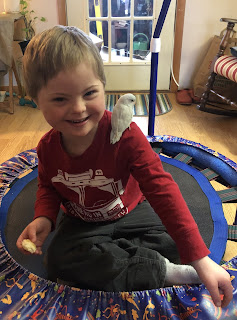 Kirby is a parrotlet.  He is three month old.  A tiny bird with a big personality.

Why am I telling you about this bird?

Because the way that Brady P. Kirby have evolved together is quite beautiful.

At first, Braeden was very skittish around the bird.  It would land on his head, and he would slap around with his hands and shout, "Ahhh!"

Also, Kirby was not going to trust the little chubby-fingered boy who kept poking at him through his cage.

Craig and I knew there was a lot of work to be done if those two were going to get along.

That first picture depicts the first time Braeden successfully said, "Step up!" to Kirby, and Kirby, dutifully, yet cautiously stepped onto his finger... crawled up his arm and rested on his shoulder.

We were so proud!

After that, things got easier.  Although B will go up to his cage and let the bird out without us knowing, he is more gentle.  He reacts more with one finger out to say "step up" in stead of swatting the bird in a panic.

They are actually quite cute together.

And P. Pie loves to see the bird right when he walks in the door from school or wherever.

See?  Still dressed from the outside. 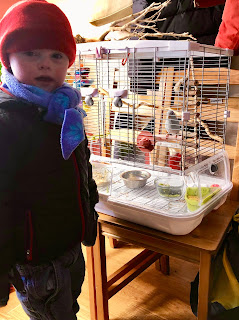 I can't say that our guards go completely down when those two are together now, but we are definitely proud of the strides both of them have made with their trust in each other.

Cuz really, it takes two to trust.  And form a friendship.  Hopefully their friendship will last for years.

In case you didn't know, it's snowing.

For a week now.

It snowed 45 inches in the last week according to the Keweenaw Snowfall totals.

Granted, that's not totally wild or unheard of by any means, but the temps have dug into the single digits each day for that duration as well.

Surprisingly, I am getting used to it all.  That first day of cold snapping wind waiting for the bus with Brady P. was torturous.  But now I wear my snow pants while I do that.  And as long as I find a place out of the wind to adventure outside, it's actually quite lovely!

As for the snow, well, I really like my snowblower, so I, in a strange way, enjoy blowing the snow.  Doing it every day gets to be a bit much, but it will end someday.

It's quite beautiful, and most people are appreciative.  I'm so glad to live in a place where (at least when it comes to snow) people don't see property lines as borders, but they see a hierarchy in the time, equipment and energy they have as a way to help others that are less fortunate in that way.

That could be a nice analogy for life.

"Can't we just all pretend it's a week of blizzards in the Harbor?"  Then we can all just get along.  And share what we have.  And be grateful when someone helps us.

That was me jumping off my soapbox.

I bet if Brady P. knew that you said hello, he would say hello back.  So, hello from Brady P!  He sure is a little wonder of a person.

(There is a video in the blog feed.  Enjoy!)

I just want to say that wherever you are, whatever you are doing, and however you feel in this moment, go easy on yourself.

Life is still pretty stifling right now.  The world is not so carefree.

Take a moment to be grateful that you have made it this far.  You are still alive.  You (hopefully) have a safe place to live, food to eat and air to breath.  You are lucky.

And although you are most likely on a good path in general, please just go easy on yourself.  Maybe even do a little nice extra thing for you and someone you love.

You both deserve it.

Here is a picture of Brady P. doing the almost splits.

Because he is awesome. 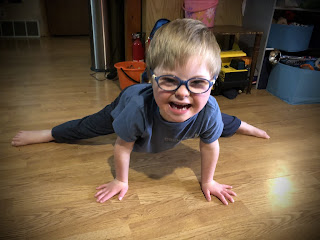 And because he doesn't mind that it's the almost splits and not the total splits.  He is still impressive!
at February 03, 2021 1 comment: