I've got some exciting news!

The Brady P. Project is proud to announce that we're helping to sponsor our first event!  Here's the flyer. 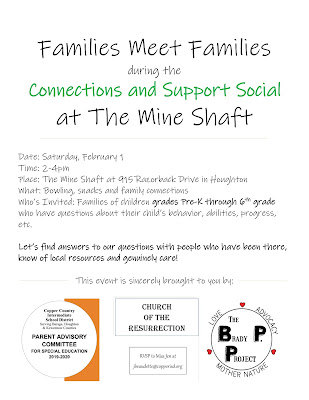 The mission of the Brady P. Project is to spread unconditional love, advocate fairness for all human beings and help people learn about and respect Mother Nature.

We're doing it!  With this first event, families that have a child in school that might need help, but don't know where to turn or who to talk to, can now get out for a social afternoon of food, bowling, friendly conversation and resources to help make sure all their kids are on track.

One step at a time.

The Brady P. Project took shape when I (Braeden's mom) realized that my little boy with an extra chromosome is made of pure love.  He is in the moment.  He is all inclusive when it comes to people.  He is curious about nature and loves to be outside.  And he always wants people to be happy.

Well, gosh darn (as my Grandma Gertie used to say), we should all be like that!

So through this non-profit organization, I am trying to give people the opportunity to have resources available to make these things happen.  With our funds, we are able to donate to events and other organizations that follow this mission.

Do you want to be a part of the mission?  You can donate too!

No pressure.  I'm not that kind of girl.

But here is the cool magnet you get for donating!  We can even throw in a sticker if you donate in the next week because then I'll know you donated through this post. 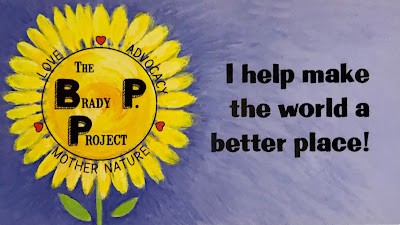 I also believe that if you follow your heart and do the right thing each chance you get, you will have a wonderful day.

Remember that little cold Braeden got?  Well, he had it for a month.

Yup, hacking and barking throughout the night.  Crying for me several times in the darkness.  Telling me his throat was "ouchie," so I had to squirt kid's cough syrup and pain reliever into his mouth.

That wasn't flying with me for many reasons.

So I had to figure out what the problem was.  I didn't want the goop in his respiratory system to turn into pneumonia (if that's really how it works), so I took action.

It was time to go outside every day.

I was already picking him up from school most days in his chariot with skis.  Easy to get from here to there, but he was pretty much sealed up inside it to keep the wind out of his face -- which he hates.

He also wasn't getting any exercise that way.

So I started making him walk home with me.  He likes to pull his red sled, so I put him in charge of that, and he walks and runs quite purposefully with it.  He feels proud.

Sometimes we'll go around a few blocks if it's sunny.

It's been wonderful for us both! 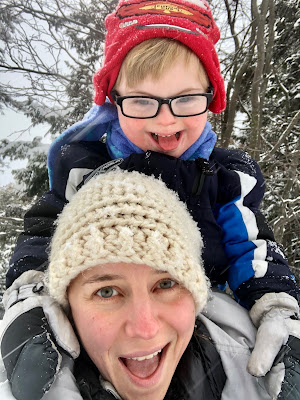 He even helps me move snow!  Well, he thinks he's helping.  He has his own shovel! 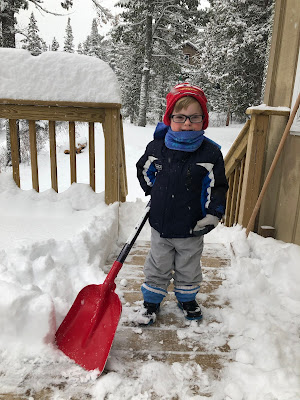 And when he gets bored with that, he uses his digger from Uncle Matt! 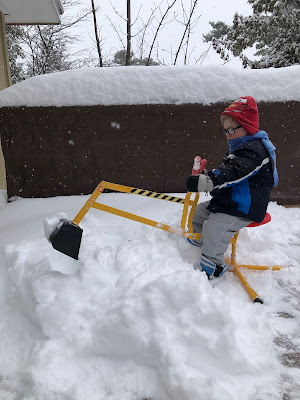 His cough is just remnant at night and he only calls for me once or twice.  I haven't administered medicine for about a week.

Whew!  I think we're doing it!

I sure hope so because we all deserve to rest well at night.

Oh, and by the way... Brady P. is officially a big brother!  Aaron and Kelsi had a little boy last week!  His name is Cedar.  Braeden can say his name and knows that's his little brother down in Arkansas.

I think he really wanted a sister, but I'm sure he'll love this guy too.

Email ThisBlogThis!Share to TwitterShare to FacebookShare to Pinterest
Labels: Cold, Outside, Remedy, Winter

I have to brag a little bit.

It has brought me to tears to realize that...

He can open his kindergarten reader books and read many of the words by sight.  He is also able to sound out some other words and use the pictures as cues and context.

The boy has a photographic memory, so he also memorizes words easily.

He is very proud of this fact, and will read his books to anyone who will listen.

He might start out pretty quiet and shy, but when I remind him to read loudly, he straightens up and nearly shouts the words!

This little 5-year-old boy is reading and loving it!

Here is a little video for evidence.

Please enjoy.  And remember... anything is possible!

After I took this video, he read a new book about vegetables.  What really surprised me was that, even though some of the pages read "This is a ______," some of them read "These are ________," and he caught it!  He read the correct words the first time!

This lets me know that he is not just reading robotically.  And he is so sweet when he gets to a word that he doesn't know, and he looks up at me for help.  We sound it out together and keep on reading.

It was all pretty new and exciting as he has't yet performed in a Christmas, Thanksgiving or Memorial Day Program.  This was his first performance in front of half the town.

He had no idea what was coming.

We went to the school house early to get him in his elf costume. 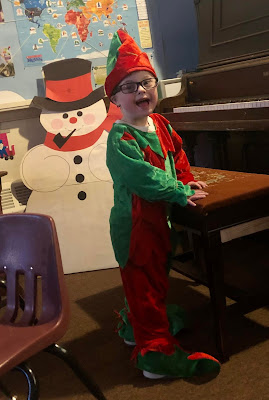 Cute as a button, he was!  I was pleased with how eager he was to put it all on.  No struggles.  Whew!

He ran out into the performance area with the other kids before the show began.  Everything seemed pretty normal to him.

Then, just 10 minutes before the show, all the kids went into the "preschool room" to wait for their grand entrance.

Unbeknownst to Brady P, the room filled up with townsfolk while they were in there.

The lights dimmed as I sat in my front row seat.  When I heard the first jingle of bells prancing out, I started my video rolling.  Out came the first elf, then the second, then... a jingle of bells plopped down by my feet and pouted, "Noooo!"

Braeden parked his green and red velvet tushy on the floor and was not going to budge.

Alrighty then, I thought.  Into the preschool room we go.

I thought I'd be able to convince him to go back out.

"Your friends are out there!" I said.  And I told him the names of some of his favorite people in town.

"All the people are too much for you?" I asked.

"Yes," he said and grabbed a fistful of my hair for comfort.

I immediately thought back to my first Christmas program.  I was in preschool.  The moment I saw how many people were in the audience, I bawled, and refused to go on the stage.

So I had compassion for the little man.

I told him my story and held him in my arms.  We changed him out of his elf suit, so he didn't feel like such a spectacle.

By the time the show was over, chairs were moved, people stood up and the lights were bright.  Brady P. was happy to enter the masses in that setting.

All the kids rushed out, and gathered around.  Braeden was the first (and maybe only) kid to give him a big hug.  All the people said, "Awwww," and I don't blame them!  I teared up!

So the rest of the night went well.  And we made it through the debut performance.  I think it's a right of passage to run off with stage fright your first time out there.  Brady P. is apparently no exception.

I think it was Friday before I realized I forgot to post on Wednesday.

But Wednesday was Christmas.  I was in Wisconsin with my family and even extended family that I haven't seen in years. I drank a couple Old Fashioneds and walked around with bells on my shoes.

I was being so merry that I forgot about you.  Sorry!

So here are some highlights from our holiday.  It sure was a banger of a Christmas time.  As someone who doesn't have a real Christmas tradition, I never know what we're going to encounter year to year.

But this year was pretty special!


(If you are reading this on the automated email, please click onto the blog page, so you can see the videos.)

That first video is a visit from Santa.  I was shocked that Braeden was so excited and warm to the jolly man.  He wouldn't go near him at Winter Wonderfest, but maybe he felt safer at Nana and Grampy's house.

One of wee man's gifts was a microphone/music playing stereo. It's sweet.  We even figured out to turn it into a karaoke machine!  I don't have permission to show you those videos, but let me just say that when Nana sang Super Trooper like she was on stage, my dad and I almost peed our pants.

This next video is an example of what Brady P. does with a microphone.  He starts to say the names of dinosaurs in alphabetical order.  Whaaaaaaaat?  What 5-year-old knows a dinosaur name for each letter of the alphabet in order?

He is a genius.

So we had family and friends over every day for four days in a row.  That's a lot of homemade wine sampling.  That's a lot of meals.  And at each meal, Brady P. would look at people, one by one, and say, "EAT!"

The accused non-eater would say "I'm eating!" through a mouthful of ham or meatballs or pie or whatever was being chewed.  We chuckled at his love for bossing people around.

But then we turned the table on him.

When all four grandparents were sharing a meal (a beautiful thing in itself) we all pointed to little man and told him to eat.  His reaction was priceless!  We all cracked up with tears in our eyes.

Here is a replication of that moment.  His reaction was the same, but you can never quite capture the surprise and humor of an original moment.

That little boy.  He sure knows how to command an audience!

Well, I hope you have some wonderful memories yourself.  By gosh, by golly, have yourself a joyous new year.