I'm sorry, but our Saturday did not go as planned, so I don't have any pictures of the scene.

I'll tell you about it instead!

Brady P loves to dance.  He also loves to watch live music.  He is so curious about instruments, musicians, sound boards, speakers, etc.

So when Zik's has live music each Saturday night in the snowy months, I have to take him!

We'll walk over, all bundled up, and once he gets inside, he'll run to the end of the room where the musicians are set up.  If they are already playing, he'll start to dance, coat, mittens, hat and all!

If they're still setting up, he will carefully examine every foot pedal on the board -- even if there is only one.  He will push the buttons and turn the knobs, if the musicians let him.

I always make sure that the musicians know who he is, and we feel out their temperament toward letting a 5-year-old fiddle with their buttons and knobs -- totally affecting their sound.  Ha!

The bartender will come over and say hello because she loves him too.  One night she said, "I hope the musicians know that Braeden is in charge of the music here!"

He gets people dancing.  He charms people's hearts with his dance moves and curiosity.  He brings in more tips for the musicians.  He learns all the instruments' and musicians' names.

And then, before nine o'clock, he has to go home for bed.  Mom says! 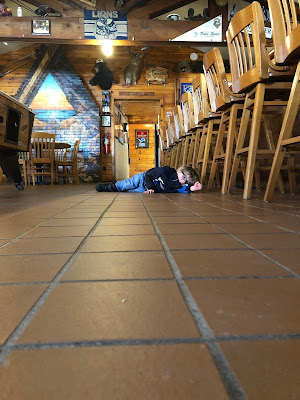 An artsy shot of B lounging in the lounge one day

I have had random visitors, locals and musicians tell me that my son made their night because he is so precious.  I mean, how can I do all these people a disfavor by keeping him home???

As long as we are both feeling good, we can go.  So we go.  To feed his curiosity and show off his moves.

One night, he busted out this sweet backspin move followed by an on-the-back full body wiggle.  The crowd went wild!

And on many nights, I have watched the musicians stare straight at him while they sang or played their guitar or drums.  I swear, they are either inspired by him or playing for him.

I have an idea for a new post, but I want to get some pictures for it on Saturday.  I will post that one next week.

In the meantime, if you haven't already checked out the Dino ABCs video, here's the link.

Brady P and I are probably the only people I know who could recite them.  But want to know an even cooler thing about it?  He doesn't even say the same names each time he goes through the alphabet!  That's right.  He knows so many dinosaurs that I never know which one he is going to say for each letter.

Here is the link to the Dino ABCs video on YouTube!

If you are viewing this through the email, copy and past the link below.  It's safe, I promise!

I've got a real treat for you!

I'm traveling the next two days, so be patient with me.

Want to know what it's about?

Well, last weekend I attended my first Michigan Technological University hockey game.  It was part of their Winter Carnival event.

At one point between periods of the game, the announcer quizzed two students (college age, I think).  The question was: How many dinosaurs can you name?

The girl they selected named four dinosaurs and the guy named six (but technically, he got one wrong.  I know these things).

Craig and I looked at each other and laughed because we know that Brady P. could name waaaaaay more than that.  I don't remember how much time the contestants had to name dinos, but they ran out of ideas before they ran out of time.

This hot, valiant feeling ran through my body.  I realized that I must show the world how smart Brady P. is at dinosaur names!

(That's me pulling my sword from its sheath.)

You can laugh.  It's a bit dramatic.  And dinosaurs are extinct, so why does it really matter? 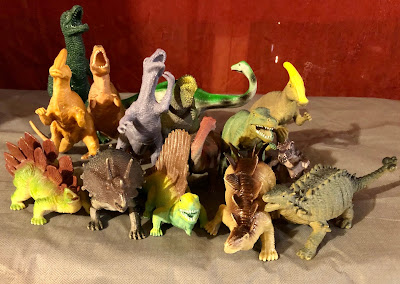 But I believe that you know.  You know why it matters.

I'm working on captioning the video I took of him saying dinosaur names in alphabetical order, so you can see how amazing it is.

So the whole world can see how amazing it is!

And then it will go viral, and we will get on a talk show where everyone can see how cool that little boy is.  It's trending, you know...

I'll post that video as it's own, when it's ready.

Brady P. has been into puzzles lately.

Pretty much every day we do at least one of those big floor puzzles.  Anywhere from 32-60 pieces.  And he is getting really good at it!

He's got many to choose from: dinosaurs, Charlie Harper animals, pirate ship, farm and (his new favorite) the United States of America.

It's quite charming to hear him say "United States of America" because, well, that's a mouthful!  He says it so fast that sometimes it just sounds like "Jamaica," but at least I can recognize what he's getting at! 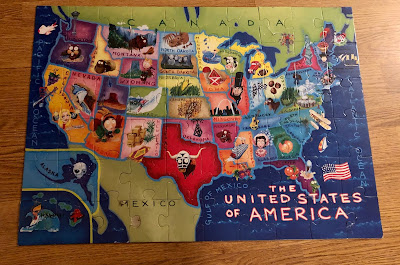 So we'll sit down and do a puzzle or two in the afternoon.  The puzzles sit on the floor for a little while and when he comes back to one, he'll pull a few pieces out, bounce that little index finger in the air and say, "one more time."  Then put them all back in.

I find that quite unique.  I haven't known anyone else to do that before, but I like it.  If we leave a puzzle on the floor, he will do part of it over.

He will actually do it several times and pull apart different corners or edges of the puzzle.  And he always gets it back together 100% on his own.

He is also really into these opposite cards.  He is quite proficient in matching each of the opposites together.  Then he likes to sink them all back in the box.

Never ending entertainment, I tell ya!

And to recap our bowling event last weekend, it was a success!  A few families came.  All the kids made friends with each other (I could tell by how they were all chasing each other around at the end).  A few of the parents exchanged phone numbers and some picked up resources for future use.

We will do this again with older kids soon.  Thanks for your support!
at February 05, 2020 No comments: