We've had some blizzards and such lately. High winds too. Even single digit temps.

I'm not complaining, just stating the past weather report in case you were curious. Besides, it's winter, so if we didn't have those things, it would mean the world is coming to an end.

But I've been feeling super awesome lately, and I want to make sure B and I get out for some fresh air without getting frost bite.

Saturday was the day.

The sun was even shining!

I somehow convinced him that we were going for a ski. I would wear my cross country skis, harness up and pull him in his Thule Chariot on skis -- one of my saving graces of motherhood.

I bundled him up with blankets and set one of those hot water bottles in his lap. He must love to watch me ski because he is quiet back there now.

When he was younger, he would cry shortly after we got out, and our trip would always be cut short.

The two times we got out so far this year have been miraculous in that department.

But back to Saturday.

Yes, the sun was shining, and he commented on that several times. We hitched up, and I took him on the Fort Wilkins trail starting by Our Lady of the Pines church.

The wind was from the south, so it blew over the East Vein ridge and across Lake Fanny Hooe.

But the sun was shining!

I pulled him to the Fanny Hooe Creek and promised he could get out because he was getting antsy. The trail then takes a curve and parallels Hwy. 41 on the way back to town.

You know the one.

He got out and pushed the Chariot while I skied. Before we started this leg, I asked, "Should we go see the lake? We are right by the lighthouse overlook."

A bit disheartened, I forged back home. He was good at pushing from the back. What a great break for me!

"Let's go to the lakeshore."

Now when I am all hitched up, my total length from the tip of my skis to the back of the Chariot has to be about 10 feet. Not an easy turnaround stunt on a ski trail.

But the lake was worth it, so I maneuvered us 180 degrees to go see Her Majesty. It's been so windy and cold, that B hasn't been there for quite a while.

So to the lake we went.

The shore is different in the winter time, of course. Thick layers of ice create a false shore and extend out above the lake itself.

We crawled down a bit over some frozen wave formations.

"Let's sit together," he said.

He sat on my legs, and I wrapped my arms around him.  What a sweet moment in life.

But then he did was I always do.

He got up and kept going... toward the water.

Oh my goodness. He is me.

He crawled over those frozen humps on a mission.  On all fours, if he had to.

Suddenly I was all the people who I nearly give a heart attack to when I bolt to the shore over unknown conditions to the very edge.

But I had to let him go.

I don't let anyone stop me, and I'm not going to stop him.

We went together, of course. I love it too. I just finally felt it from a more cautious person's point of view.

So there we sat on the edge of the thick ice -- maybe two to three feet from the water. The depth below was probably to my knee or thigh, so, on the off chance we went in, we wouldn't die.

At least not from drowning.

There we sat and watched the low waves roll in and splash the ice in front of us. It was a dream come true.

There I was, doing something adventurous (and a little precarious) with my offspring. On the shore of Lake Superior in the sunshine. In the winter. In Copper Harbor.

We both loved it.

My heart swelled so big.

It made all the hard times worth it. I felt victorious.

So we sat watching the undulations creep toward us.

Then we would mimic the sound it made.

I explained to him why it was safe for us to be there at that moment. But even so, we had to pay attention to our surroundings.

He agreed to pay attention.

And he really did. He listened to the sounds. He watched each wave roll in. He felt the ledge beneath us.

He is getting it, and I am so proud.

But I was also getting cold.

Pulling a 70 pound sleigh makes you sweat. Well, at least it makes me sweat!

So I was getting chilly sitting on a shore made of ice.

Mind you, I also gave him plenty of warning that this moment was coming.

I could tell that it was going to be a real challenge to convince him that we had to go back. I get it. I didn't really want to go either, but I was only going to get colder until I could be a mule again.

I did my pretend walk away in hopes he would follow, but he didn't even care. I went back to sit beside him for a "couple more" waves.

Finally, he agreed to walk back with me, so I didn't freeze. It didn't take long before I heated up. Even just walking helped.

We crossed the highway and waved to some friends driving by. I bundled him up and harnessed myself up.

Down the trail we slid. The trail was not tracked, but it was quiet and peaceful. I was in heaven. That whole ordeal meant so much to me!

Boy, this post is getting really long, but those are most of the good parts, so I'll leave it that for today. Just know that we made it back with only a couple tribulations. Ha!

Oh, and a picture of Her Majesty from a different sunny day... when I had my camera. 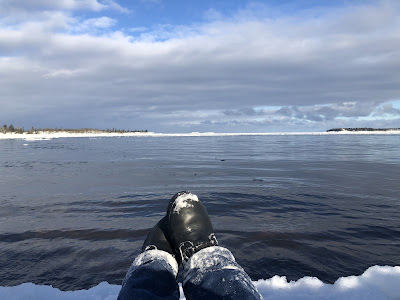