If you've read Digging for Light, you might remember a story where a teenage boy, who thought Brady P. was really cool, asked me what Down syndrome was. He had never heard of it.

Do you remember what I did?

I gave him a text book answer from the 1980's. Not very flattering for that extra 21st chromosome.

Well, today I was talking to a grown man about my son. After a while he said, "I don't really know what Down syndrome is."

I started with the typical extra 21st chromosome biology stuff, but I realized that doesn't really mean much to anyone unless they are in the medical or biology field.

Then I flashed back to that moment I flopped with the teenager. I realized that this was my moment to redeem myself! Someone who didn't know what it meant! How could I shape their reality?

In a mere second, I figured out how to break it all down into two parts. I took a deep breath and started.

"Well, I think there are two main components." I said. "For one, their brain is not really set up to learn and develop like most people do. They have to work really, really hard and do things many times before they really understand most concepts.

"For two," I continued, "I think they are more connected to some of the important things in life. They are better able to empathize with others, show unconditional love and be grateful and joyful in the moment."

There. I did it! And I think he understood.

It was really a neat moment in my life, I suppose.

I just find it odd because I am a mother of someone who has that extra chromosome, so I take for granted that everyone knows what it is. And when somebody doesn't, I'm so shocked that I almost don't know what to say!

But I think that answer sums it up for the most part.

Then I went on to list some of Brady P's talents and ensured him that even people with Down syndrome are different amongst themselves just like all humans are.

Cuz we all are. And we should respect that.

Brady P. likes to take dogs for a walks. I don't really recommend his services yet because he is quite a leash yanker, but maybe he'll ease up someday... and get a job! Ha! 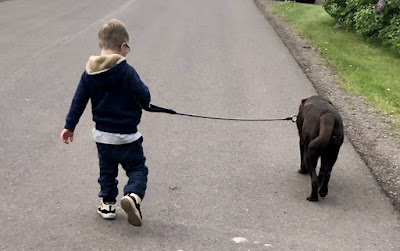