Taking It All In

I have to tell you about this moment I had with Brady P last week.  Well, Brady P. and the greatest freshwater lake in the world.

The air was chilly and breezy, but I knew we could handle it.  As long as we bundled up... and I brought a blanket to sit on because it snowed a bit that morning.

B loves Hunter's Point, so whenever I tell him we're going there, he complies with all the necessary prep like getting his jacket and boots on and getting into the van.

I drove to Hunter's Point to get us out of the house for a bit.  And see that beautiful lake.

We walked down the boardwalk to the lakeshore.  At the end, of course, we got hit with a facefull of wind.

"Brrrrrr!" I shivered.  "Good thing we have a blanket!"

I let him pick our path to the shore.  He likes to make decisions.  And when we got to just the right spot, I laid down our blanket.  I sat on one end and he sat on the other.

You know what we did then?

We became one with the waves.

You've probably heard me talk about this before.  Brady P. has this fascination with the rhythm of the waves and the force with which they break and splash.  He will sit there mesmerized as his body works into little convulsions with each crash.

I have grown quite fond of this characteristic of his, so I have started doing it too.  I let my body get all excited when a nice looking wave rolls to the shore.  Then I shake and tense up just as it crashes with my eyes and mouth wide open.

It probably looks so silly.

Especially when we both do it.

But that's what we did!

And then he crawled onto my lap.  I covered his little legs with his end of the blanket and snuggled him in my arms to keep us warm.

Then we watched the waves together.

Oh, I should tell you that the beach that day was carved out pretty low, so the waves broke just below our head height.  We were sitting quite close to the water level, so it almost seemed like we were floating on the lake too.

It was so cool.

But I honestly think that was one of the most special times we had out there together.  He didn't throw a single rock.  We just watched each wave come in with the utmost curiosity, excitement and respect.  Cuz we got sprayed a couple times!

And there I was with the world's sweetest little angel boy in my lap as our bodies shook together with each roll and crash.  Then we would look at each other and silently agree that that was a super good one, and then look out at the lake again to watch the next wave.

It was really so magical that I knew I had to tell you about it even when we were still out there.  It was a few days ago, so I can't do the moment justice.

But one of the oddest parts to me was that he did not pick up a single rock to throw.  Not one!  And he's my little rock chucker.

That day we took it all in.  Sometimes you have to do that. 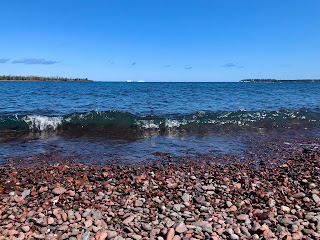 You know full well that this is not a picture of Hunter's Point.  Nor was it taken last week.  But hey, I had to slap on a picture of her Majesty somehow!