Hello!  Gosh, you're great.  You always come back for more.

I would imagine that at this point, you don't even know what to expect when you click on this blog.  It's not very predictable -- at least in my eyes.

So today you're going to get a grab bag of fun.  That's right.  A random mix of musings: some deep, some light, but all of them are true.  Cuz, let's face it.  That's how I roll.

Okay, now close your eyes and pick one out.

Now look at it!  What did you get?

Prize #1: Ice Rink!
The boys at Grant Township flooded the basket ball court behind the school, so now it's an ice rink.  But not only is it a rink, they keep it shoveled off too!  Good golly gracious, we haven't had an ice rink up here for years!  And for the last couple days, the school kids got to go out to skate during recess.  When I showed up yesterday, I was enchanted.  All of the kids (except the two wee-est) were wearing skates on the ice while pushing small plastic chairs with those little metal disks on the bottoms -- learning how to skate!  That was a site, all right.  The two tallest girls could have used bigger chairs, so they weren't hunched, but I doubt they'll need chairs for very long.  And when they all came in from recess, their cheeks glowed and their spirits soared.  They want to skate everyday to infinity.  Now that Brady P. is getting it, I'm even more excited to go out there with him.  I used to want to be an Olympic figure skater (when I was 12), so I enjoy gliding and twirling myself.  Wait til I try it with a chair!

You picked a fun one!  Reach in again.

Prize #2: Stephen King
I am just a few pages away from finishing my first Stephen King book.  Yes.  My first.  And maybe only.  Can you guess which one I picked up after all his years of writing?  No, really.  Guess!  Okay, you're wrong.  You didn't even know this one existed (but please comment if I'm mistaken!).  It's called On Writing ~ A Memoir of the Craft. When I saw that cover staring at me one day at Grandpa's Barn, I was stunned.  "What?  Stephen King wrote a book about writing?  And it's non-fiction?  Holy buckets!  He is like one of the most popular writers I know!  I better get his insight."  So, yeah. I'm almost done with it, and let me tell you what.  He writes a lot like me.  Or, I should say: I write a lot like him.  Without even trying.  It's just a gift, man.  And that's what he says.  One of the most memorable quotes I took so far is this, "It is, after all, the dab of grit that seeps into an oyster's shell that makes the pearl, not pearl-making seminars with other oysters."  I think that quote can apply to any craft or talent.  If you got it, you got it.  Now harness it and make some pearls!

Want to do another?  Come on.

Prize #3: Confession
I have a confession.  I think you're going to be disappointed in me, but I am going to tell you anyway because if you can't tell your shortcomings to an audience comprised of people who love you and people you don't even know, then you're afraid of something.  I left Copper Harbor on January 8th and got home on February 1st.  Today is the 13th.  Do you know what I have not seen up close in 36 days???  Oh, man... it's so hard to admit.  I have not seen the splashing water of Lake Superior.  I can feel my heart just yeeeaaaarrrrning in desire.  But when I drove the lake shore since I've been home, it has been frozen as far as the eye can see.  Now, I think it has broken up a bit out there, but the harbor is definitely solid.  Excuses!  Excuses!  I need to get out there!  I need to find an open spot of Superior sweetness and listen to the waves and dip my fingers in her glory and feel my heart sink fully back into my chest.  Don't get me wrong, it is difficult this time of year to get a taste of Her Majesty, but I am determined.  I'll chip through the ice if I have to.  Hopefully I won't fall in.

Okay, that one made you want another one, right?

Prize #4: Breathwork
As you may have noticed, in my last few posts I have alluded to the fact that my life took an unexpected and difficult turn lately.  I felt broken.  B.R.O.K.E.N.  Have you ever felt that way?  Do you feel better now?  I sure hope so.  Like I said a few posts ago, I had to do a lot of emotional purging, meditation and conscious focusing to get back on track.  But I have to also tell you about a breakthrough technique I found.  It's called breathwork.  And honestly, I don't know a lot about the origin, but my friend Rachel leads sessions online, so I took one a few weeks ago.  I expected to have a relaxing time breathing peacefully.  Not the case.  At all.  I started doing this breathing where you focus, not on deep breaths or holding it in, but on keeping a consistent cycle inhaling and exhaling.  I imagined my breath like a wheel turning from my abdomen to my heart.  I would do this the best I could until I bawled my eyes out -- several times.  Then I would breath in a cycle again until my arms shook wildly, my lips quivered and my feet felt numb.  Or I laughed hysterically.  Or my whole body tensed up to the point where you could have put my shoulders on the top of one chair and my calves on the top of another and I would have laid there like a quivering board.  Ho.  Ly.  Crap.  That was an experience of a lifetime.  But, do you know what?  I felt waaaaay better afterward.  I felt focused and positive.  I felt so alive and renewed.  And I have learned that when I feel fear or anxiety creeping in, I can just take some time to practice this breathing technique, and I will feel much better.  It has never felt as intense as it did since Rachel's guidance that day, but I think I may have shaken out some of the shadows.  I think this is really awesome.  If you want to look more into it, check out Rachel's website.  Thank you, Rachie!!!

Whew.  That one was rather expected.  Should we try one more?

Prize #5: Brady P.
Yeah, yeah, I know.  You wanted to hear about him the whole time.  That's because he's awesome.  He is a little parrot these days.  He will repeat what people say... even unsuspecting people!  Now, his every word is not yet understandable, but you can tell he's repeating what you said.  So watch your mouth, sonny!  He is also doing much better now that we are home.  He loves going to school.  Loves playing with his toys.  Loves sleeping in his own bed.  Loves bossing me around and telling me which song to play next.  Loves to hold hands and say "Thank you for this food" before we eat a meal.  Loves to test his knowledge.  Loves to play the matching game (still, but sometimes I beat him now!).  And just loves.  He is such a lover.  He is the epitome of love.  And I am so grateful for him in my life.

Prize #6: Bubbles
I took this picture of Braeden just after he got his glasses.  It's hilarious -- especially if you have ever seen the Trailer Park Boys because he looks just like Bubbles.  I put this picture on facebook and it went wild.  But just in case you're not on facebook, you should have a glance (and a chuckle) as well.  Enjoy! 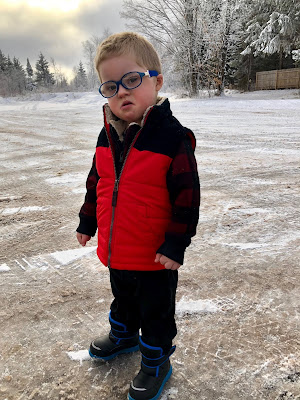 No caption does this justice

Well, thanks for playing the grab bag of randomness with me today!  I sure had a good time.

Just one more thing:  Thank you, thank you, THANK YOU! to my family and community of Copper Harbor.  Life is fulfilled in unique ways with that support.

Take care of yourself now.  And go do something fun that you've been meaning to do.
at February 13, 2019