This past spring Brady P and I took the trail behind our house for a little walk. Upon cresting a short hill, I saw a dead red squirrel lying right in our trajectory.

There was no way he wouldn't see it, so I decided to announce it.

Usually when we see a dead squirrel it is smashed with its guts hanging out on the road or something gruesome -- a perfect example to give for why we look before we cross the road.

But this little guy must have gotten poisoned or something because he looked like he was just napping... in a rigor mortis position.

Now, I don't know if the stuffed-animal-like appearance of this particular red squirrel made him question my diagnosis, but it could be part of it. I do know that if any living person has a booboo of any sort, he is quick to aid and sympathize.

He is made of love.

I was ready to move on, so I took a couple steps ahead on our path. Brady P was not ready.

He crouched down in his little stance and spoke quietly to the squirrel. When I think back to that moment, he might have even put his hand above the squirrel in a reverent manner.

What he said was inaudible to me, but the way he crouched there made me envision him as a priest giving the rite of passage to this stiff little animal.

I was instantly blown away by this.

A moment later, he stood up and confirmed, "Mummy, he's dead."

He touched my hand and said, "It's okay."

Then he lead the charge, and we walked on.

We have talked about death before, and I inform him when someone he knows dies. "They died?" He usually asks, leaving me wonder what he thinks death means.

But after that experience the squirrel, I have a feeling he understands.

Maybe even more than I do.

Pay attention, my friend. Life is sweet if you look for the sweetness. 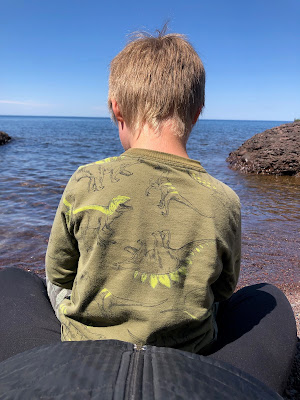