He is so adventurous!

Last night we went to have pizza at a friend's outdoor pizza oven (so sweet, man!). Brady P was cool with chatting for a bit and eating some snacks, but then he got antsy.

We were at the end of a driveway in the woods. Next to a lake. Lake Lily, in fact!

So I followed him while he found a trail through the bushes.

"Mummy, let's take the trail!" he shouted with ambition. I followed dutifully and confidently.

"Okay, this way, Mummy!" he informed me as we took the way we didn't take the last time. 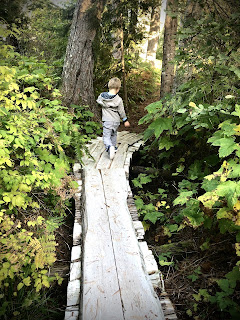 He even descended all the stairs to the dock, and we looked around at the lake for a bit. But not long... he had places to go!

What a strong boy, back up all those stairs! All by himself.

He is really fun to walk behind. I like to hear him talk about what he sees in the woods and which way we should go and how he feels when a trail ends.

After he learns the intersections, he likes to take them over and over again to test his sense of direction and see if he remembers where each one goes.

This is also really fun for me to observe. I love watching his brain work, and I am impressed because I don't think I was like that as a kid.

To him, though, each unknown direction is a chance for discovery. Each intersection is a decision to make. Each dead end is a chance to backtrack and start again.

I love following my fearless leader. I'm so proud of him, and I'm excited to see where more of our journeys will lead us.

Will you go some place new today?