How many Wednesdays are they putting in a week now? Sheesh!

Yesterday was my birthday, so I didn't write, as you can tell. But I will say that my soul entered its thirties as a lamb and it's going out like a lion!

Okay, here's a story for you.

I found this situation to be quite eye-opening, so I'll see if I can share it with you properly.

I picked up my little man from his grandparents' house on Saturday. We drove back to Copper Harbor on Sunday.

On the way, I had to stop for gas. It was just over halfway of our five hour drive, so I figured we could both go in for a potty break and pick out a snack. It's just the novelty of it.

I pulled up to the pump. I pushed the "Pay Inside Credit" button cuz I knew we would make a purchase inside as well.

I returned the nozzle and opened Brady P's door.

"Okay." I acquiesced. "Wow, you are still dry! We will go potty inside too."

And I helped him heroically jump out of the van.

"Do you want to put on your mask right here or before we go in?" I asked and fumbled with our masks. I put his on before we went in.

Then we used the restroom. The one-seater woman's room. I went. Then I helped him go. Then I wiped down the seat because he can only do it if he stands on the seat. We washed our hands.

I opened the door to see two ladies waiting in line.

"Oh! I said. "Thanks for your patience!"

They were not amused.

B and I browsed a couple aisles. I grabbed an orange juice. He found the ice cream. As we scanned the shelf for something not-so-dairy, I heard a man shouting.

"Your gas is timing out!"

Pause. I was not paying attention.

"Your gas is timing out!"

I heard these words, but I thought somebody was saying that they couldn't pump all their gas or something.

Then, the man behind the counter got closer.

"Ma'am! Your gas is timing out! It thinks you're a drive-off!"

Oh my gosh! He was talking to me!

"Hurry up, Braeds! Pick something out! How about a Rice Krispie bar?"

"No, Mummy," he said, still eyeing up the ice cream cooler.

The man behind the counter grew increasingly nervous, so I figured I'd do the unthinkable -- use my debit card twice in a row. Ha! Like that was a big deal!

I left B to stare at ice cream, and I walked up to the counter, noticing a muffled alarm going off. Geez.

"How about if I just pay for my gas now and then pay for our other things when we are done?" I asked him.

I have never heard of gas timing out before, but apparently it's a big deal!

I paid him and then found my child who picked out a push pop. Good grief. He can't push his own push pop! I knew it would be work for me while I drove (sticky work at that!) but it was also not really a dairy item, so at least we would sleep that night.

"Okay, bud. Put it on the counter, so he can scan it," I told my triumphant child.

Then I used my debit card again for a pittance of an amount, but at least the man had relaxed.

"Thanks for your patience with us," I told him with sincere eyes.

B and I walked out, and I half expected the police to follow my van and ask me if I paid for my gas, but that didn't happen. Good thing because I didn't get my receipt! Ha!

While I buckled the sweetest little boy on the face of the earth into his carseat, it kind of dawned on me: I am a very patient person.

Nothing we did, from the time I pumped gas, until the time I got timed out, was hurried. At the same time, nothing was too much out of the ordinary either.

We were simply a mom and her son making a pit stop on the way home.

And now I wonder how many of those timing outs he has in a day... or a month!

But we apparently took too long, and that was just fine with me. Next time we take too long, I'll know what I am getting shouted at for! 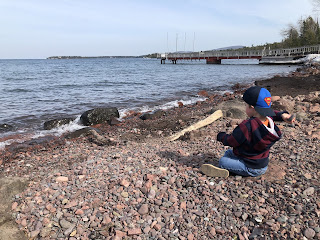