A Lesson in Phonetics

Take a deep breath.  There's no quiz at the end.

And by the way, I didn't know what phonetics was until after the first day of my phonetics class in college!

My Dictionary app defines phonetics as: "the science or study of speech sounds and their production, transmission, and reception, and their analysis, classification and transcription."

Don't stop reading just yet.  This will all make, sense, I promise!

Why did I take this class in college?

I was an English major, and my advisor recommended it.

I absolutely loved it!  As nerdy as it sounds, I was fascinated by the intricacies used between our brain and mouths (tongue placement, lip shape, breath movement, etc.) that produce the sounds we make to speak clearly.

It's what allows us to communicate with each other.  And it's such a beautiful thing.

Why do you think babies  usually learn to say the "ma" and "ba" sounds first?  Because they're easy sounds!

Hum behinds your closed lips and then open your mouth a bit.  Did you say "ma" or "ba?"  Probably!

Now say the letter "f."  Notice how you have to rest your top teeth just right on your lower lip and blow with just the right pressure to make an "f" sound.  That one is more difficult to master.

I know because I have Brady P.

He used to only be able to cognitively blow through his nose (birthday candles and all!).  He would position his teeth and lips to look like the "f" sound, but then he blew the air through his nose and blinked his eyes.  Ha!

Try that.  Say a few words with an "f" in them while blowing out your nose (and blinking).  Not very efficient.

I'm not going to go through the entire alphabet with you.  You can do it on your own on your next drive.  Pay attention to which of your mouth's accessories you use to complete each sound.

It is really something!

Now here is my point of this post.  It is also what I am so proud of with Brady P.

He can now make all the sounds of the alphabet pretty flawlessly (when he enunciates) except the letters: d, j, l, n and t.

What do they all have in common?  Can you tell?

They all require you to put the tip of your tongue to the roof of your mouth.

This is hard for Brady P. for a couple reasons.  One is that his tongue prefers to go out or down.  It is a lot of work for him to stick it up.  The other is that the roof of his mouth is higher than most, so he really has to work that tongue extra high.

Okay, now hold your tongue somewhere in the middle of your mouth and try saying d, j, l, n and t again.

If you are unable, for any reason, to get your tongue up there, you will not be able to produce those sound correctly.  And after so many failed attempts, your brain will reroute the placement of your mouthparts until it happily substitutes a sound.

(As another example of this, many kids sub the "wa" sound for "ra."  Heck, even some adults do!  That's a tricky one!)

But the substitutions are pretty consistent.

I'll be honest, though.  I don't know all the time!

But we are trying.

And with such a great team to model how to make those sounds, I know he won't stop trying until he gets them just right.

And here's to that phonetics class I took in college.  What a jewel that turned out to be -- especially when I sit in on his speech therapy sessions. 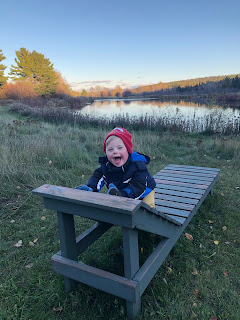 One of my new favorite pics of him
In the Wescoat Field
at November 11, 2020