With spring approaching and the harbor starting to open at the mouths, his favorite pass time is creeping back into our lives.

During my alone time last week, I scouted the area by the lighthouse overlook.  It's where Fanny Hooe Creek enters Lake Superior.  And right along the edges of the rushing creek, I saw those smooth beach stones poking their little noses out, begging, "Bring us Brady P!"

Monday, though I was ill-prepared, I took him to the rocks with our friend Stacia and local puppy Fern.  We walked to the lookout area and hobbled down to the "lake" which is still a frozen tundra into the distance.

(However, her shimmering blue majesty is writhing on the horizon.  Oh, am I trying to be patient!)

As we plodded along the crusted snow, hand in hand, I remembered about the rocks along the ice line.  Fern was already in the creek, so we headed toward her.

When we got to the edge, little Brady P. caught sight of the rocks in the water.  Remember, he was hanging on to my hand, so not only did I see his body straighten out of the corner of my eye, I felt his energy rise through his mitten.

You may as well have told him he was getting a pony or a kitty cat.  He was so excited!  He perked right up at the sight of those rocks, and my heart just beamed at the thought of how much he likes being out there.

I fished out a pile of rocks, so the boy didn't fall in the creek.  He had to stand to throw them because he had nowhere dry to sit in his jeans.

Our only other conundrum was that Fern loooooves to catch rocks --  just like Duce did!  But we weren't going to subject her to that, so we practiced throwing to this side and that.

Yesterday the four of us set out again.  This time with a seat for Braeden and a change of mittens.  He was pumped all day to get out there and throw rocks.  Man, he was really in his element.

And so was Fernie girl.  We actually had to separate those two, so we didn't bring her back to her mama with fat lips and missing teeth.  Those rock hounds, I tell ya! 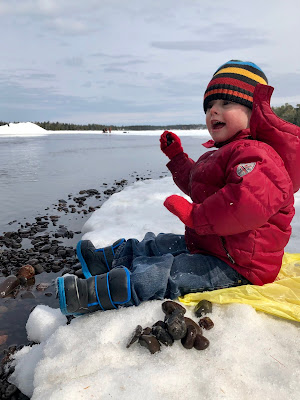 Look at that boy beam!

Note the ripples in the open water and the ice fishermen perched at the edge of the harbor ice.  I don't think I would even go out there!

But as the runoff continues, and the sun beams and the rain sprinkles through the porous snow, our rock beaches will open up.