I just noticed that last week's post was number 50 for Downs by the Bay!  50 posts inspired by Brady P. and Copper Harbor.  Wow!  Perhaps that's why last night's sunset was so soul-blowing.

Let me tell you about it.

But before I tell you, I will inform you that you need to pay extra attention to my words. Why?  Big surprise... I did not have a camera to capture even one moment, one color or one sparkle.

But I captured it in my soul.

Brady P. and I drove to Bryce's beach to catch a sunset and throw some rocks.  The whole drive there, I could see these clouds.  They were very unique.

It was like looking at the underside of hundreds of sacks of fluff.  They all hung, packed together across one section of the sky.  And somehow, with the sun still above them, a golden light illuminated their curves, so sensually that they each left their own impression in the sky and on my mind.

I watched those clouds the whole hike down the beach, too.  "Oh, those clouds!" I kept exclaiming.  They just grabbed a part of me.  I wonder if I will ever see that sight again.

After Brady P. was done being mesmerized with the oncoming waves in the freshly open lake, I got him to run down the beach to a rock throwing spot.  That kept him busy while I sunk a few myself and watched those clouds.

I kept checking to see when the sun was going to sink below them.

Hold your fist out in front of you as far as you can with your thumb down.  Now imagine your thumb side is the horizon of the lake and your pinky side is the bottom of those clouds.  The rest of your fingers represents approximately how much clear sky was between the clouds and the water.  Not too much in the grand scheme.

After a few more splooshers, I noticed a concentrated spot of golden light at the bottom of the cloud sack clusters.

"The sun is going to drop!" I squealed.  I found it ironic that the sun was dropping during a sunset, but it was going to slowly fall out of those clouds and drop into the middle of Lake Superior.


Suddenly, pshew!  The rays shot forth from behind the clouds, and started to illuminate the beach with a soft, warm glow. The golden sacks of clouds darkened into a mass of shadow.  They became the great dark wall in the sky.

The waves started to sparkle from behind.  Oh, my mighty Mother  of Nature.  The rhythmic waves, about 6 inches tall from base to crest, turned into clear, moving water windows.  I could see the slowly dropping sun's light right through them.

It sparkled, it danced, it took me to a new place right on this earth.

My heart felt like it was struck by lightening.  Every cell in my body tingled and shook as I took in the beauty before me.

And the water splashing from Braeden's rocks leapt up like liquid gold as the sun illuminated the droplets from behind.  I had to throw rocks myself just to watch the golden splashes.

Remember your fist as the sky?  Now imagine the bright burning sun filling that gap like your fist. Just fitting between the clouds and the lake for a minute before it sank into the sparkling water.

I know you're not supposed to stare at the sun, but I did't care.  I had golden orbs filling my vision everywhere I looked and each time I blinked.  It was so worth it.

Because then the sun sank into the lake.

"Bye-bye, Sun!  See you tomorrow!" I waved, hopeful that I really would see it tomorrow.  That is never guaranteed here in the Keweenaw.

And slowly the golden backlight faded as the waves became dim.  I could have taken that as a loss, but the next show was equally as spectacular.

As the last bit of sun sank below the horizon, all hell broke loose.  Now I only say that because, well, what do you think the sky would look like if "hell" opened up and spewed its fiery hues?

A deep magenta/red glow lit up the horizontal stripes on the bottom  of that wall cloud.  It was like a  claw ripped across it, and the claw marks remained dark.

In the foreground, new clouds made an appearance.  You know that pearl-backed white dragon from The Never Ending Story movie?  He was up there, with hot pink fur and his mouth open, billowing his deep, hearty laugh, as he flew northward through the sky.  And all around were similar shapes as if he was joined by smaller friends.

I dropped my jaw in the rocks.  Holy fantazamagoly.  I was simply stunned sitting there in that swath of rocks.  I just stared in amazement at the beauty in this world.  This sky.  This lake.  This universe.

As the sky continued to darken, and the red glow retreated, I found my jaw and clicked it back into place.  I took the lightening bolts out of my heart and threw them in the lake.

Surely, she would deliver more again.

You've earned a picture of the other day when we were puddle splashing.  Braeden likes splashing in puddles as much as he likes throwing rocks.  He always comes back drenched, and it's hard to pull him away! 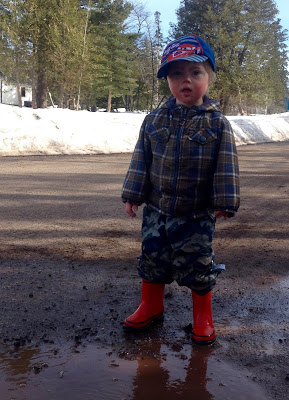