I would wish you happy holidays and all that, but I am not a fan of Christmas. If you can't tell, I'm done pretending in life, so I prefer not to say things to people if I don't really mean them.

It's a process, but we've got to start somewhere!

Completely switching gears, let me tell you about something that amazed me yesterday.

Brady P is a tiny bit obsessed with animals.

Remember how I told you about Old MacDonald perpetually? Well, I forgot to tell you that it's played at the same volume you'd hear in a crowded bar, and accompanied by "crazy" disco lights. My neighbors can attest. 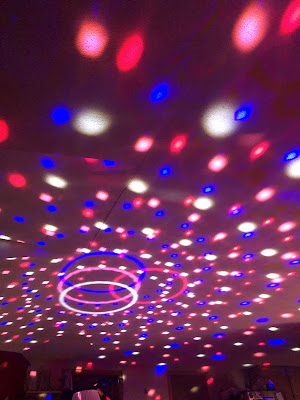 Our ceiling...
What have I created???

And neither one of those are my decision on a daily basis. HA!

Back to the amazing story.

Brady P found a bag of animal figurines that I got for him for Christmas. Yeah, I know... Christmas is over, but I was hoping to use those as bribery one at a time for prizes for listening to me when it's really important.

We didn't get that far.

"Actually, Braeds, those are for prizes when you do something -"

Oh, man. He was so excited that I acquiesced.

He already has a whole basket of animal figurines: birds, mammals and insects from the savanna, jungle, farm and forest.

He knows all about them, so they have become a bit mundane. He categorizes them and puts them back in the same order.

60 animals going back into the basket in a categorical, yet logical  (or OCD) order. Yeah, I can safely say obsessed.

So these new animals had to be different, and I was happy to find some more exotic ones. Some of them were so exotic that I had to take a screenshot of the listing of animals with their names, so I could make sure I matched them correctly for Brady P.

Cuz he would know.

He even knew some of the ones I had to check the names for.

When he pulled out this animal with stripes on it's butt and back, he said, "Okapi!"

And I checked the list and said, "Umm, wow, yeah! That's the okapi!"

Then he pulled out this short black and white one with a long nose and said,"a tapir!"

He also surprised me by correctly naming the meerkat, platypus, wildebeest and boar. But those first two... holy heavens in a flower pot. The kid is a genius.

He played with his 25 new animals with an excitement as if he had electricity running through his body. I've never seen somebody so absorbed in figurines. Like they are his friends and they're alive.

But good for him!

After he pulled them all out and read their names on my cheat sheet, we had to look a couple of them up because, well, they were not correct.

We gave them the correct names. 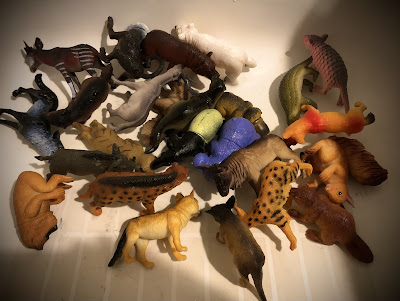 The pile of new animals surrounding the drain after their inaugural tubby
at December 29, 2021