A couple days ago Brady P and I set out to walk around the local meadow. It's most usually a lovely time.

When we got to a bridge crossing, he crossed it - counting each plank along the way. Then he noticed an apple tree that previously let loose a couple bushels worth.

Sploosh! The first apple landed in the pond after slinging from his catapult arm.

Well, that delighted him so much that he started to pick them up two by two, walk to the edge and toss them in gleefully.

I saw the plethora of apples under the tree and figured I had time to sit with my legs dangling off the bridge while the creek flowed towards me.

What a lovely afternoon. The only sounds were the rushing of the water beneath me, the wind rustling what was left of the leaves, a sweet little boy chuckling to himself and the splooshing of apples - two by two.

After some time, he decided to throw two apples upstream. He chucked them in in my line of vision.

I watched them get whisked away by the gentle current, and immediately thought of how my dad likes to throw snowballs over one side of a bridge and then run over to the other side to see when they make it through.

They usually make it through.

This was a little plank bridge, and I could keep track of the apples' journey.

One apple made it under rather quickly.

"Check it out, Dove!" I called to his busy little body. "One of those apples made it under the bridge. There it is!" I pointed.

"I wonder when the other one will come!" I chirped.

I could see the second apple swirling around and around in its own little pool of unyielding rocks. And in that moment, I realized that I put an expectation on that apple.

An unfair expectation an inanimate object.

And pretty instantly after that, I realize that we, as humans, do that all the time.

Sure the first apple made it through. Does is make it better than the second apple? Faster, stronger, smarter?

What if the first apple got eaten by a bear because it floated by at the exact moment the bear was hungry? And the second apple was spared?

What if the second apple needed to spin and swirl for minutes or hours or the rest of its life in order to learn what it needed to learn in its lifetime?

What if the second apple sacrificed its life by weathering the unyielding rocks so the next generation of apples could pass through with ease?

What if a mouse fell off the bridge and grabbed the apple, changing its course, so they both floated to shore, and the mouse's life was saved?

Who was I to expect that apple to float under effortlessly like the first one?

Who are we to judge anybody else's journey? We have no idea what is in store for another person in this world. Not our parents, our partner, our children, our friends or even the people on TV.

When we put an expectation on another person's journey, we disrupt the natural flow of their path, and we stifle ourselves with that expectation because, really, we have no control over it. And to think we do causes us and them distress.

So let's do everybody a favor, and get over it.

It's hard enough to feel like we're in control of our own journey. Even so, we are not. We just get to react to what life hands us and try to plan for the next step... whatever it will be.

If that step is on our list, then it might be something we need to learn - whether others think it's wrong or right.

Who are they to judge?

How about them apples? 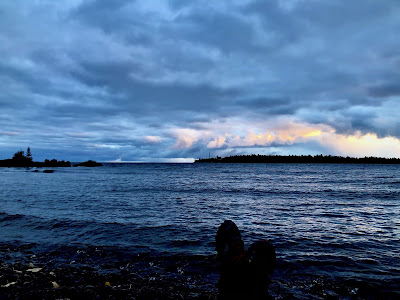 Lake Superior this morning
doing whatever she wants
because who is going to judge her?
at November 03, 2021