If you ever see a family with a child with Down syndrome, don't ever, ever feel sorry for them.  Don't think that they wish things were different.  Just know that those parents and siblings (if they have them) feel so blessed.

They feel like this extraordinary person in their life is truly a gift.  They know that they have already learned so much more than they ever would if things would have been "normal."

I speak from experience, and it echoes for everyone I have ever talked to who has this special person in their life.

Nobody would change it.

If you happen to be somebody who is in this situation and you would change it, please feel free to let me know.  I haven't met anyone like that before.  I am very open-minded and I will listen.

Now let me tell you how cool my little person is.

He likes to do things.  Lots of things.  And he is surprisingly good at anything he likes to do.  I believe that's because he does those things 100%.

I suppose he will go through the motions for some things if he has to for a reward, but otherwise, it ain't happening.  (Like getting his boots on for the bus some mornings... ugh!)

Take the simple act of eating a piece of chocolate.  Like most normal human beings, he loooooves chocolate.  He doesn't get it often, but when he does, he sits down somewhere, holds his pinky up, takes tiny bites and (from what I can tell) thinks only about how wonderful that chocolate tastes.

He focuses 100% on that chocolate.  That's smart.  And it's being in the moment.

The other day he found "Baby Sadie" a doll who helped him learn how to potty train.  He picked her up and fed her a bottle.  He rocked her, kissed her and hugged her.  He petted her head and talked to her.  Then he laid on the chair with her and covered them both up with a blanket for a rest. 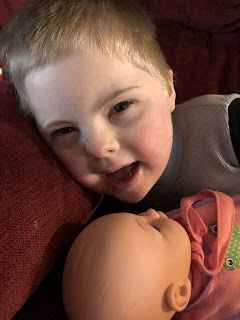 What an angel boy.

When we play a matching game like Memory (we have three different ones!) he is all in.  He pays so much attention that he remembers cards that I completely forgot where they are.  He has his favorite cards out of each stack and, when he finds it, he puts it in his little corner and tries to find the match each time after.  He is so diligent and sharp.

The other day I set up the hockey net, brought up our sticks and Braeden found the pucks.  We took turns shooting.  He was so into it that I made us each little signs with our numbers and he said they should go on our backs. 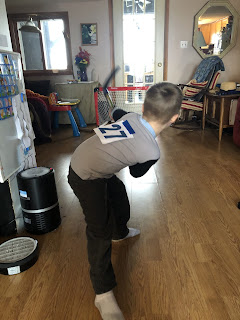 I did not make all my shots because I went farther back and tried fancy moves.  But when I made it, he squealed, "Great job, Mummy!"  And he meant it.

He doesn't do it if he doesn't mean it.

And low and behold, he is one of the best impromptu dance party buddies I have ever known.

When I get a wild hair and ask if he wants to have a dance party, he is down.

Now I'm not going to pretend that we just turn on some music and dance.  Oh no.

We turn it up, plug in the moving colored lights, put on a skirt (sometimes with jingles), don a wig or hat, push on some sunglasses and, if it's dark, break out the glow sticks. 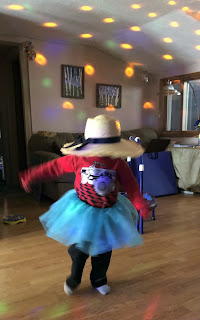 Not only does he love the dress up part, he loves to show off his moves.  I mean, we can't just look like good dancers, we have to be good dancers!

I'd like to throw up my hands and say that I don't understand how he comes up with such awesome moves, but I think it's nature and nurture.  The kid has moves.  He choreographs his body into intricate patterns.  Now, we're talking floor spins, inversions, splits, bends and the whole what-have-you.

The kid is on fire!

He just gives it his all.  And why wouldn't he?  What's the point of going through the motions when he can be really good at all the things he likes?  What is stopping him?

And that, my friend, that is the beauty of it all.

A person with an extra chromosome knows what they like, and they do it with all their heart.  To them, there is no other way.  And for us 46-chromosome people, it truly is a gift to watch someone live that way.  We would be silly if we didn't try it ourselves.