Brady P. is turning into a big boy.

His extra chromosome definitely curbs the timing of his milestones, but he is getting there.

I wonder if the UPS driver is confused by the fact that I still get Pull-Ups delivered to my house.  I mean, Brady P. is six years old.  Is he really still in diapers?

But each day we have been working on peeing in the potty.  Haha.  I hope that terminology makes you smile because it's just what parents say to their kids during potty training.

He wears his superhero underwear after he goes pee in the morning and keeps them dry throughout the day.  Usually I set a timer, but he has been really good about keeping himself dry and knowing when he has to go.

I have to tell you of a proud moment.

We came up into the house, and I did a little cleaning up before his bed time.  When I was done, I looked around for him.

I scanned a couple rooms before noticing the light was on in the bathroom.  I cracked the door open, and what did I see?  A sight that hit me so hard, I cried because I realized that we are reaching a new point in our lives.  I felt, for the first time, that he is not going to be in diapers forever, which was what it felt like before.

There, through the crack in the door, I saw little Brady P... well imagine a drunk man in an alley peeing on a brick wall with one hand against the wall, so he doesn't tip over.  Head down watching his stream.  Add his shirt tucked under his chin and his pants around his ankles, and you have Braeden's position over his Paw Patrol potty.

What a little man.

And all by himself!!!

He decided he had to go, and he went in and did it all by himself.  No timer.  No prodding.  No help.

I really was quite floored with the occasion.

So now I give him more control over when he goes because, well, only the one who has to pee knows when he has to pee.  And he's been proving it pretty consistently.

The number two on the other hand, well, that's a work in progress.  And I'll still put him in a Pull-up if we leave the house just in case, but we are getting there.

Yes.  We are over the hump because he recognizes the urge and he can do the whole process including washing his hands all by himself.

We agreed that his resolution for 2021 was to get out of diapers, and we are already so close!

Way to go, Brady P.  And thanks to our family and mentors who helped him get this far.

In order not to embarrass him with a superhero underwear picture, here is a cute one from a walk last week. 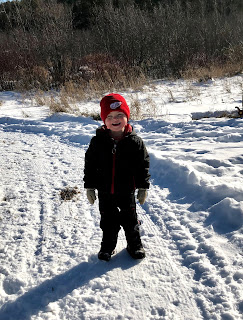 Have a wonderful day!

Oh, and speaking of resolutions, I started writing my next book, and I hope to get it out this year.  I am working on it!