Without really understanding the full concept of "sports," Brady P. is really into sports.

He loves to watch slam dunks, half court shots, puck handling, net shots, chipping and putting on the green -- especially when the player of any of those games make their shot.

When he watches someone score and/or celebrate their shot, he goes into convulsion-type things.  Have I told you about this before?  It's nuts.  Here's a picture of one of his moves that I caught last winter before the world shut down.  He still does the same thing... maybe more intense even! 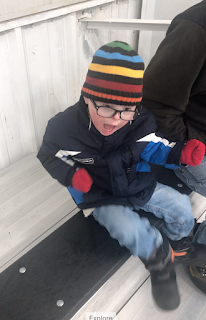 Sometimes it's just as exciting to watch hime react as it is to watch the actual game!

Not only does he like to watch these sports, he also likes to try them himself.

I remember the first time I took him to the shores of Lake Superior where we could sit right in the rocks.  It was the spring of 2015, so he was anywhere from 6-8 months old.

He picked up a rock and dropped it, mesmerized by the sound and the gravity of it.  If I could properly monitor him from putting them in his mouth, I'd let him play.

Well, as you well know, that morphed into an obsession of throwing rocks into the lake.  And from those early days, he began to hone his strength and accuracy.

He's a real Nolan Ryan.  A Harlem Globetrotter.  And possibly, in time, a Wayne Gretzky.

He loves to watch and he loves to play.  And when Craig asked him what number would be on his jersey, he said, "27."

So he calls himself number 27, and sometimes we have to use that to get his attention or make him do what we want when he's being stubborn.

So, of course, we all have numbers too.  I won't get into all of that, but feel free to pick a number for yourself!  What number would be on your jersey?  The sport doesn't even matter because you can be in a bunch of them like Brady P. is.