If you've been keeping up for the past few months, you know that Braeden loves animals.  Anything to do with a farm is magic to him.  He can make many farm animal sounds with his mouth even though he can't speak.  And Old MacDonald is his idol.

So while he is at Grammy and Grampy Rogers' house for the week, he gets to hang out with two goats, a miniature donkey, a cat, chickens and a black lab.  He loves all the animals.  He wants to chase the chickens, pick up the cat and pet the doggy.

But one of the animals actually loves him back.

Bella, the donkey, has become his protector.  She follows him around the yard.  She stands by his side.  She nuzzles her head into his face while he gently strokes her cheeks. 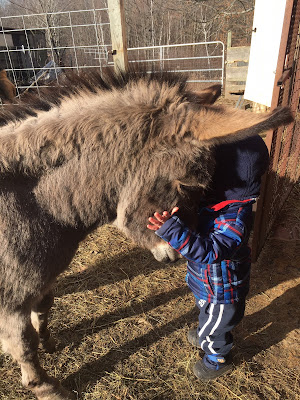 
Notice his hand on her cheek.  Notice the gentleness in her eyes.  Notice how close they get.  He looks at her like he looks at me with his cold hands on my cheeks.  I would imagine she melts too.

They snuggle.  They love.  That's what lovers do.

Grammy gave me the report of all the fun they have together.  He likes to feed her "cookies." He will hold out his mittened hand, and she will gingerly nibble it off his mitten.

He likes to feed her hay.  He will grab a mittened fistful (which usually amounts to a few sparse strands), walk over to where she is and hold his hand out for her to nibble whatever is left. 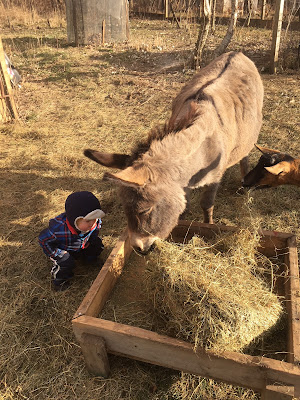 Braeden making sure Bella is getting enough hay

Oh, my goodness sakes.  Just look at him watch her!  They follow each other around.  Grammy says that they just hang out together while she does chores, and she can just trust that they will take care of each other.

So my next thought is, How do I get Bella to Copper Harbor?  Well, that is in the works.  At this point, I feel that they should be together.  Brady P. has shown affection for many animals, but this one loves him back.  That kind of connection is too beautiful to lose.